Every year, in partnership with Wandsworth Council, Enable carries out extensive habitat management activities in Wandsworth, a particularly green and leafy borough which has the most public green space as a percentage of land of all inner London boroughs. In total there are 34 parks and commons, eight allotments and five cemeteries, as well as community gardens, grass verges on council land, churchyards and old burial grounds. It total, it all adds up to 1700 acres to protect and manage.

Part of this important management 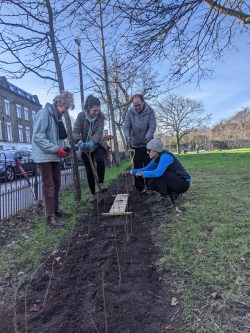 is called ‘Winter works’ and is so named as the work is done during the non-growing season when plants and trees are dormant and before the bird nesting season. The various works undertaken all aim to protect and maintain the invaluable biodiversity that we have, including bramble and cutting, coppicing and tree thinning. Enable also undertakes many planting works throughout the winter that are aimed at increasing our local biodiversity, including extensive tree and hedge planting.

This winter, over 10,500m2 of bramble will be managed across Wandsworth and Tooting Commons. Bramble is an important habitat component for wildlife in many of our green spaces, providing cover, nesting and food for a variety of birds, mammals and invertebrates.  In an unmanaged ecosystem bramble would be controlled through the action of large herbivores, so in their absence we must take over their role. Regular management improves the quality of the bramble for wildlife, prevents over dominance and prevents encroachment onto other habitats. Bramble management is conducted on a rotational basis between different locations, and whilst it can look drastic initially, the bramble grows back in no time at all (with ground cover returning within a year).

Another winter works activity that helps us manage Wandsworth’s green spaces is called coppicing. Coppicing is a traditional method of managing woodland and involves the practice of cyclical cutting of trees close to the ground during the winter (non-growing) season. The tree responds by growing multiple stems from the new ‘stool’ that is created.  Coppicing also allows additional light and warmth to hit the floor of the woodland, prompting the growth of flowering herbs and the shrub layer, introducing increased variety into the habitat, and improving biodiversity. It extends the life of the trees as they are continually replaced with new growth. Different species are typically cut on a different rotation depending on the rate at which they grow. This winter, over 1900m2 of coppicing will be undertaken on The Commons and at a few other sites.

A similar practice that Enable also undertake is called tree thinning, which is the practice of removing selected trees from a woodland in order to reduce the density of trees in an area and promote the health and growth of the remaining trees.  It can also provide opportunities for natural regeneration of a cleared area or to remove unwanted species (e.g. non-native species). We have thinned 450m2 of trees on Wandsworth Common this year.

In an effort to improve Wandsworth’s biodiversity offering and meet the aims of The Wandsworth Biodiversity Strategy, the Enable team, along with Wandsworth Borough Council, work hard to plant lots of new trees and shrubs every year. Winter is an ideal time to undertake tree planting works, giving the trees the largest chance of survival, and allowing them to acclimate to their new homes before the spring and summer months. This year’s tree planting scheme will see over 700 trees planted in parks and street sites around Wandsworth, home to Battersea Park, Wandsworth Common, Wandsworth Park, Tooting Common among the 40 plus others in the borough. Species will include London plane, cherry, lime, pear, crab apple, rowan, oak, hazel, whitebeam, maple, hornbeam, and birch.

Julia Bott, Co-Chair of The Friends of Wandsworth Common, spoke about the importance of this event, highlighting the need to “make these spaces beautiful, greener, more environmentally friendly and more attractive to users”, also noting “a lot of individuals who live around the area are really keen to get involved in practical things like planting… ”

By springtime, these winter improvements will truly enhance the green spaces of Wandsworth for the community to enjoy. Although parks are less used in the winter, Enable and Wandsworth Council are always working hard behind the scenes to make them attractive, healthy and enjoyable spaces. If you have any questions about anything in this article, please email parks@enablelc.org or call us on 020 3959 0060.

Images can be downloaded here