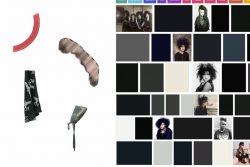 Wandsworth Council’s Pump House Gallery presents Time Crystals, an exhibition of recent work by artist David Panos that examines the contemporary revival of cultural motifs from the 1980s and 90s – particularly from ‘alternative’ and ‘rave’ subcultures.

Through the lens of Panos’s personal memories of youth culture in the period around 1989, the exhibition explores how cultural signs are revisited when there are shifts in certain social and political conditions, and how fashion and dance can reflect – or disrupt – these patterns of repetition.

The exhibition considers how the media and industrialised ‘fast’ fashion transform how we might interpret and remember the past. Colliding and contrasting ‘authentic’ archival material, digital compositing and animation, choreography and contemporary club footage in a presentation of videos and installation elements, Panos both extends and undermines his own memory and opens up alternative futures.

The exhibition is accompanied by a public programme of discussions, performances and activities designed in dialogue with David Panos. Visitors of all ages can drop in and take part in ‘A Dance and Gesture Archive’ in the gallery’s Project Space throughout the exhibition, and record their own music video of their favourite pop song. The final archive of all the videos produced over the course of the project will be shown in a final installation of films. There will also be a series of free family workshops where visitors can work on their dance moves for their music video with a professional choreographer and experiment with creative techniques that explore the exhibition’s themes on fashion trends.

On Saturday 21 October Misters of Circe and Josh GT will perform live music preceded by a panel discussion on subcultural music movements from the late 1980s and early 1990s. Further dates to be announced via social media and on pumphousegallery.org.uk. Booking essential.

This exhibition is supported by Wandsworth Council.

David Panos (b. 1971, Athens, Greece; lives in London, UK) produces videos, objects, exhibitions and music. He is half of the 160 bpm duo CLASS and co-ran the Difficult Fun label in the 2000s. Over the past 15 years he has worked in collaboration with artists and writers such as Benedict Seymour and Sharon Kinsella on long form film projects and installations and was the joint winner of the 2011 Jarman Award for his collaborations with Anja Kirschner.

Pump House Gallery is a public contemporary exhibition space housed in a distinctive four story Grade ll* listed Victorian tower by the lake in Battersea Park. The pump house tower was built in 1861 to contain a coal-fired steam engine house, water pump and cast iron tank to feed water from the Thames to an artificial rock cascade in the nearby lake and water plants in the Park. After a fire in the 1950s, which destroyed the windows and the original roof, the building fell into disrepair and eventually became derelict. In 1988 Wandsworth Council renovated the building and re-opened it as an interpretation centre. Following further development the building became Pump House Gallery in 1999, presenting a year round programme of contemporary visual art. Collaboration and participation are at the heart of its programme. Pump House Gallery has presented a year-round programme of contemporary visual art, including most recently, The Conch, Sea Urchin and Brass Bell, the first major UK solo exhibition of Canadian artist Zadie Xa, and last year Developer, a site-specific installation by Samara Scott in the Battersea Park Mirror pools, and Each fighting its own little battle in happy ignorance, a group exhibition based on the Graham Greene novel It’s a Battlefield in 2016. The gallery is operated by Enable Leisure & Culture on behalf of Wandsworth Council.

Battersea Park is a 200 acre, Grade ll* listed Victorian park formally opened in 1858, one of many intended to improve living conditions for those living in the city. During both wars, the park was utilized by the military to protect London, shelters were dug, allotments were created and a pig farm was set up. After the Second World War in 1951, thirty-seven acres were developed to form the Festival Pleasure Gardens. In 1986 when Wandsworth Council became responsible for the park, there were serious signs of neglect and much needed improvements restored and recreated the most significant Victorian and Festival features. In 2011 the Winter Garden designed by Dan Pearson was opened. wandsworth.gov.uk

Enable Leisure and Culture is a not-for-profit organisation, company no. 09487276, and registered with the Charity Commission  (no. 1172345) and is partner to Wandsworth Council’s commitment to deliver first class leisure and culture services. As a Public Service Mutual, it is a form of social enterprise that manages and delivers the arts, bereavement services, parks, sports facilities, events, the film office, public halls and Putney School of Art and Design across Wandsworth on behalf of Wandsworth Council. For further information visit enablelc.org.