Royal Marine reservists given Freedom of the Borough

Members of the Southfields-based Royal Marines Reserve unit paraded Wandsworth town centre on Saturday (Jan 28) as part of the celebrations to mark being awarded the Freedom of the Borough.

Lt-Colonel Ed Moorhouse, Commanding Officer of RMR (City of London) receives the Freedom of the Borough from the Mayor Photo credit: Wandsworth Council

Members of the Royal Marines Reserve (City of London), whose headquarters are in Merton Road in Southfields were conferred with the honour by the Mayor of Wandsworth Cllr Richard Field in celebration of their links with Wandsworth.To mark the occasion, 160 reservists, veterans and cadets headed by the Band of the Royal Marines took part in a special parade through Wandsworth Town to the town hall, where they were formally offered the Freedom of the Borough. Hundreds of local people turned out to cheer them on.

The Mayor said: “This award pays tribute to the bravery and dedication of these volunteers who have served their nation with great distinction as part of this famous and historic Royal Naval force. We are immensely proud to be associated with them.” 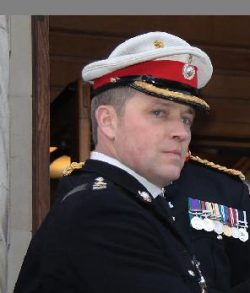 The unit’s commanding officer Lt Col Ed Moorhouse said: “It is a great privilege that has been bestowed upon the Royal Marines Reserve City of London by the granting and exercising of the Freedom of the Borough of Wandsworth. Since arriving in the borough in 2011, we have had unfaltering support from the borough council and its local residents. We are hugely proud of being part of Wandsworth.”

The Unit’s volunteers are not just part-time soldiers, but fully trained elite Commandos, Volunteers were first recruited to The City of London reserve unit in November 1948 and in June 2011 its headquarters moved to Southfields. The unit recruits from all over London, including Wandsworth, southern England and East Anglia.

The unit will become the third from the country’s armed forces to have received the Freedom of the Borough in recent years. The 2nd Battalion Royal Tank Regiment (2RTR) received it in 2011 while another reserve unit, the London Regiment, based in Clapham Junction, was accorded the honour in 1992.