A new landscaped riverside garden has been created in Battersea Park in the latest stage of an ongoing series of improvements in the park worth £840,000.

A few days ago The Promontory was officially opened – bringing a hitherto overlooked and unused area of the park back to life as part of a £100,000 scheme.

Using a generous donation of £30,000 from local amenity group The Friends of Battersea Park, combined with £70,000 from the council, this formerly closed off area some 50 metres east of Albert Bridge has been transformed into an attractive landscaped garden, brought to life by renowned designer and landscape architect David Keary of Keary Design Associates.

The promontory is a piece of embankment that juts out 12 metres into the Thames. Historical records suggest it has always been fenced off from the main part of the park since its construction in the mid -1850s and closed to the public for many decades.

This previously unused and unkempt piece of land measuring some 50 square metres is now a landmark feature of the park, offering seating and unrivalled views of the Thames and in particular of Albert Bridge.

David Keary’s design incorporates sculpted mounds, a meandering path around large trees with shade tolerant plants, while visitors in the spring will see a colourful array of shrubs, ferns and herbaceous perennials, along with a cluster of Japanese maples occupying the garden’s centrepiece.

David Keary said: “Seeing our design become a living landscape on the banks of the Thames is a fantastic experience. The garden, with its plants and walkways, sympathetic to the Park’s Victorian design style – will open up a stunning outlook across the park, the River and Albert Bridge.  I am immensely proud of the results and will be looking forward to its Spring flourish with great excitement!”

Frances Radcliffe OBE, chairman of the Friends added: “The Friends are delighted that this neglected area can now be enjoyed by everyone.  It is a real pleasure to be able to be able to sit on a bench in the garden designed by David Keary and to be so close to the river.”

The promontory is one of several areas in Battersea Park to benefit from investment worth £840,000.

Last summer a new £150,000 children’s playground was opened close to East Carriage Drive, while a new pedestrian entrance has been created between Chelsea and Rosary Gates, with associated landscaping, connecting with existing paths near the Millennium Arena.

The park’s historic Victorian seating shelters have also been refurbished at a cost of £65,000, while £160,000 has been pledged towards the restoration of the Cascade fountain – an important and prominent historic landscape feature which have over time deteriorated and can no longer be used.

The lion’s share of the funding was generated as a direct result of staging the Formula E electric motor car racing championships in the park for two years. This raised £500,000 for park improvements, as well as another £2.5m for other frontline council services in Wandsworth.

A further £250,000 has been levied from the developers of the neighbouring Battersea Wharf and Chelsea Bridge Wharf housing schemes.

Other improvement projects are now being drawn up to utilise the remaining funds, which amount to approximately £260,000.

Environment spokesman Cllr Jonathan Cook said: “Battersea Park truly is one of London’s most popular and attractive open spaces. No other park in the capital offers so much to see, do and enjoy.

“The promontory is yet another reason to visit this truly special and much loved open spaces. I’d like to thank the Friends for their generous donation and also David Keary for creating such a wonderful new space.”

Battersea Park covers some 200 acres and was opened by Queen Victoria in March 1858 having been created out of fields and marshland to create a place of healthy recreation for the huge numbers of people who had moved to London during the Industrial Revolution.

It was designed by the famous Victorian engineer James Pennethorne and the planting overseen by legendary adventurer John Gibson, who scoured the four corners of the globe for exotic plants to display in the park’s famous sub-tropical garden, the first of its kind to open to the British public.

Throughout the 20th century, much of the original horticultural diversity was lost, largely due to the impact of two world wars when the park was not only used for allotments and pig farming, but also for troop dispersal areas, bomb shelters and anti-aircraft gun emplacements. The park also suffered extensive bomb damage from Luftwaffe bombers on missions to disable neighbouring Battersea Power Station, as well as being hit towards the end of the war by a V1 rocket.

In 1951 the park was chosen as the home for the Festival of Britain Pleasure Gardens, designed by Russell Page. A permanent funfair was also included, which for many years proved enormously popular with people of all ages, but which eventually closed in 1974.

Under the stewardship of the Greater London Council, the park became somewhat rundown in the 1970s and 80s and it was eventually taken over by Wandsworth in 1986 when the GLC was abolished. Since then, millions of pounds have been spent transforming it into today’s popular and much-loved open space. 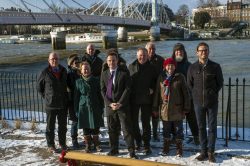 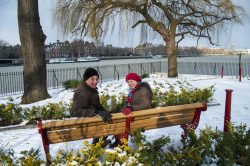 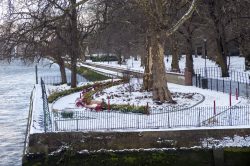 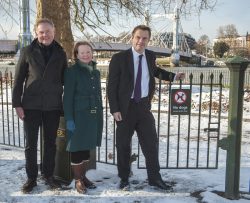