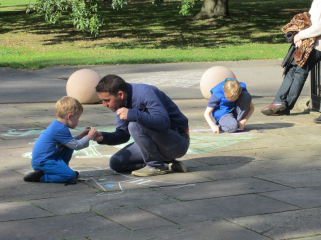 As part of the Wandsworth Arts Fringe, Pump House Gallery, in collaboration with NEON architects and Elliott Wood structural engineers, has been working with students from Chestnut Grove Academy in Balham. The students were tasked with conceiving, designing and commissioning a temporary pavilion structure to be installed on the forecourt outside the gallery. The project has been supported by St William, part of the Berkeley Group.

The students engaged in workshops and site visits which equipped them with the knowledge and skills to test out and refine their ideas to develop a design concept which was practical, safe and realistic, while being complex and visually exciting at the same time. They felt strongly that the Pavilion should be both bold and contemporary, but also reference the history and former function of the Pump House Gallery as a Victorian pumphouse. The design celebrates the pipes that used to flow from the pumphouse out into Battersea Park. The form is a series of repeated, distorting arches, designed to reference the iconic front entrance of the Pump House Gallery. Different coloured pipes are used to create a hypnotic “op-art” effect which is intended to lure the public into the pavilion; pupils at Chestnut Grove Academy were keen that a form that would encourage exploration. Inside the Pavilion, spools for storing pipes are used to form seating and tables to further celebrate the use of everyday construction materials.

Construction will start on the 14 x 3.5 meter structure in the coming weeks. The results of all their (who) hard work will be officially opened to the public on Saturday 6 May from 2 – 5pm at a special event, also designed and planned by the students. The Pump House Pavilion will be in situ on the gallery forecourt for three weeks throughout Wandsworth Arts Fringe (5 – 21 May) and will be used to host a wide range of free events, screenings, workshops and performances, .

Highlights include Secret Platform Theatre with Everything stops for tea and large-scale interactive art installation – The new union flag project.  Engage in playful experiments and quirky narratives with artist Nicola Pomery during Mixed messages, attend a screening by LUX, or join in the conversation with Keep It Complex and Matatu Kitchen for potatoes are immigrants!

“Each stage of this project has been a source of inspiration for the St William team – as we progress our plans for our residential-led development in Battersea, Prince of Wales Drive. The vision and enthusiasm of the students involved has been truly impressive. It’s been a pleasure to have been a part of the workshops that have led to the final design – which I can’t wait to see unveiled in Battersea Park next month.”

The Pavilion is a partnership project between St William and Wandsworth Council commissioned by Dallas-Pierce-Quintero and Pump House Gallery as part of the borough’s Cultivate education programme. It forms part of the cultural development programme for the Nine Elms district, which aims to extend the vitality of London’s South Bank all the way to Battersea Park.

Pump House Gallery is a public contemporary exhibition space housed in a distinctive four story Grade ll* listed Victorian tower by the lake in Battersea Park. The pump house tower was built in 1861 to contain a coal-fired steam engine house, water pump and cast iron tank to feed water from the Thames to an artificial rock cascade in the nearby lake and water plants in the Park. After a fire in the 1950s, which destroyed the windows and the original roof, the building fell into disrepair and eventually became derelict. After renovation the building opened as an interpretation centre in 1988 and following further development became Pump House Gallery in 1999, presenting a year round programme of contemporary visual art. Collaboration and participation are at the heart of its programme. Pump House Gallery has presented a year-round programme of contemporary visual art since 1999 including most recently, Developer, a site-specific installation in the Battersea Park Mirror pools by Samara Scott, and Each fighting its own little battle in happy ignorance, a group exhibition based on the Graham Greene novel It’s a Battlefield in 2016. The gallery is operated by Enable Leisure & Culture on behalf of Wandsworth Council.

Battersea Park is a 200 acre, Grade ll* listed Victorian park formally opened in 1858, one of many intended to improve living conditions for those living in the city. During both wars, the park was utilized by the military to protect London, shelters were dug, allotments were created and a pig farm was set up. After the Second World War in 1951, thirty-seven acres were developed to form the Festival Pleasure Gardens. In 1986 when Wandsworth Council became responsible for the park, there were serious signs of neglect and much needed improvements restored and recreated the most significant Victorian and Festival features. In 2011 the Winter Garden designed by Dan Pearson was opened. www.wandsworth.gov.uk

Cultivate is a creative learning programme for young people focused on culture and place-making. It creates a bridge between regeneration, cultural opportunities and local young people in Wandsworth. It is conceived by Enable Leisure & Culture for Wandsworth Council. The programme is part of and has secured investment from A New Direction’s London Cultural Education Challenge. The students from Chestnut Grove Academy in Balham were supported in their project of conceiving, designing and commissioning the temporary pavilion structure through the cultivate education programme. For details on this and other projects involving young people visit https://cultivate9elms.wordpress.com/

Enable Leisure & Culture is a not-for-profit organisation, company no. 09487276, and registered with  the Charity Commission  (no. 1172345). As a Public Service Mutual, it is a form of social enterprise that manages and delivers the arts, bereavement services, parks, sports facilities, events, the film office, public halls and Putney School of Art and Design across Wandsworth on behalf of Wandsworth Council. For further information visit www.enablelc.org . For the latest updates and news follow on twitter @enablelc and @PumpHouseGal

Chestnut Grove Academy is a mainstream state school for pupils aged from 11 to 19 that prides itself on being a happy and vibrant place to learn. As an art specialist school the visual arts are central to the Chestnut Grove ethos.

NEON is an award-winning design practice that seeks to explore new territories between architecture, design and art. For NEON, design is a process of invention and discovery that grows from the client, the brief and the social, economic and technological environment. They are particularly experienced at producing public projects at an urban scale that engage with the public, transform the ordinary into the extraordinary and create moments of surprise and excitement.

Elliott Wood is a design-led Civil and Structural Engineering Consultancy. Elliott Wood has a history of creative engineering, delivering projects from new large-scale building structures, refurbishments of existing buildings with a cultural or historical significance, bespoke architecture, to specialist sculptures and other structurally demanding installations.

Appointed by St William, Dallas-Pierce-Quintero has devised the cultural strategy for the Prince of Wales Drive Development to the east of Battersea Park. This is the first realised commission from a number of projects proposed within the cultural strategy that engage with the historical and geographic context of the development site. Dallas-Pierce-Quintero has brought together a number of partners to deliver this exciting project.