Sriwhana Spong: a hook but no fish

Sriwhana Spong: a hook but no fish 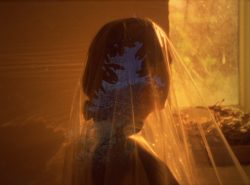 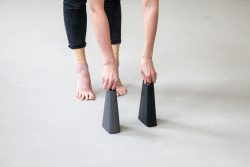 The exhibition follows the artist’s research into the Lingua Ignota, a language invented by twelfth century mystic Hildegard von Bingen during her 39 years at Disibodenberg monastery, Germany.

Central to the exhibition is a new film titled a hook but no fish (2017). For the film, Spong travelled to the site of the monastery where an 8 year old Von Bingen was enclosed with two others and raised as a nun against her will.

Supposedly a language received by Hildegard by divine inspiration, the Lingua Ignota may have been a secret language used to increase solidarity amongst Hildegard’s fellow sisters. The language is composed of a 23 letter alphabet and introduces words like ‘wagon’, ‘plough’ and other man made objects, whereas mammals and other creatures have been omitted. These omissions have inspired the title of the show, speculating that perhaps the Lingua Ignota was an apocalyptic language written for a future where only technology and tools survive.

Within the exhibition, Spong presents a musical bell plate. This is an instrument which is part of an ongoing project that over a period of time, develops a personal orchestra influenced by Balinese Gamelan. In Gamelan tradition the pitch of each orchestra is often specific to individual villages and as with the Lingua Ignota story, highlights how sound can often be a unique indicator of place, history and custom.

The exhibition continues with a series of ‘sigils’, painted symbols considered to have magical powers. These sigils spell out ‘Rothschild’s mynah’, the name of a critically endangered bird endemic to the island of Bali. Through these abstract paintings, Spong casts a spell attempting to halt the species’ imminent extinction, encouraging visitors to consider language’s power to make things tangible.

There will be a series of workshops and events reflecting the themes of the exhibition. Please see ‘Notes to Editors’ for more details.

This exhibition is supported by Wandsworth Council.

Alongside a hook but no fish, Pump House Gallery presents the first in a series of events using storytelling to explore the impact human beings have made on the environment.

The first takes place on Wednesday 17 January, 6 – 8pm with ‘Writing Worlds/ Writing Time’, an artist’s talk and writing workshop with Alex Ressel and Kerri Meehan, who will share stories and materials from their research into narratives surrounding nuclear power.

Alongside the exhibition artists Rebecca Glover and Fritha Jenkins present ‘Sounding objects’. Drop in to the gallery’s Project Space or take part in our family workshops to discover found objects and sculptures waiting to be tapped, rattled and played by visitors. Create your own soundscape and experience sound in a fresh way after listening to a guided sound walk of the park.

See pumphousegallery.org.uk for more details on the above.

Sriwhana Spong is a New Zealand artist based in London. She works across various mediums – film, sculpture, performance – where experiential knowledge, autobiography, and fiction are entangled with carefully researched materials and forms that reflect their particular cultural contexts and sources. Recent exhibitions include: Im Wintergarten, daadgalerie, Berlin (2016); Oceanic Feeling with Maria Taniguchi, ICA, Singapore (2016); having–seen–snake, Michael Lett, Auckland (2017); The Score, Ian Potter Museum of Art, Melbourne (2017). a hook but no fish will travel to the Govett-Brewster Art Gallery, New Plymouth, in May 2018