Wandsworth Council’s Wandsworth Arts Fringe (WAF) returns from May 3-19, and this year promises to be more accessible than ever. For its tenth anniversary, Wandsworth Arts Fringe is hosting an impressive range of events that are widely accessible, including several that showcase the work of disabled artists.Action Space is showcasing 6 artists with learning disabilities: Assembled… Read More 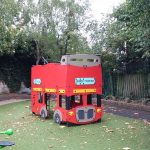 Work on improving the children’s playground in Upper Tooting Park is now complete  The £56,000 improvement project was funded by the Wandsworth Local Fund (WLF)  – a charge levied by the council on developers – and was developed following extensive consultation with park users. It is part of a string of planned playground improvement projects… Read More