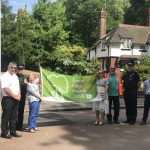 Battersea Park has again been confirmed as one of the best green open spaces in the country after successfully retaining its coveted Green Flag Award. Described as “the jewel in the crown of London’s parks”, the award from leading environmental charity Keep Britain Tidy recognises the best parks and green spaces across the UK. A… Read More