The £56,000 improvement project was funded by the Wandsworth Local Fund (WLF)  – a charge levied by the council on developers – and was developed following extensive consultation with park users. It is part of a string of planned playground improvement projects over the next two years.

The changes are part of a policy to make sure all new and renovated playgrounds in the borough are  accessible to all children, including those who use wheelchairs, are autistic or who have a visual or hearing disability. 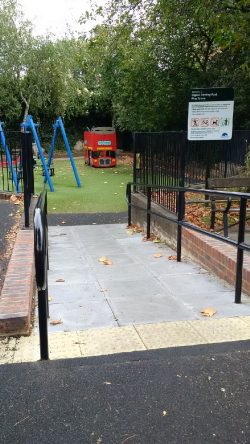 Other playground improvements funded by the Wandsworth Local Fund are in the pipeline:

“I hope children in Tooting enjoy their new-look playground. We want to make our playgrounds accessible to all our young people, and I am very pleased that Local Fund money is being used to improve these vital facilities for local neighbourhoods.”

The Wandsworth Local Fund is the neighbourhood element of the Community Infrastructure Levy –  a charge the council makes (mainly on new homes) to pay for the infrastructure needed to support the development, such as new or safer roads, park improvements or a new health centre. Fifteen per cent of the levy  must be spent on projects that take into account the views of the neighbourhood where the new development has been built. Find out about applying for WLF funding.