Over the summer Enable, in partnership with Wandsworth Borough Council delivered an extensive programme of free or low-cost holiday activity to local young people. Kicking off in July, young people with disabilities were welcomed to five specialist Watersports sessions which saw the participants enjoying a mix of paddle sports and sailing. The sessions, led by the excellent staff and volunteers at Wimbledon Park Watersports centre saw 27 children access the sessions across the five weeks.

One parent said, ‘It’s a great hour for them to be out on the water, the parents can sit at the side and watch, it gives the kids a chance to be independent which is great’. 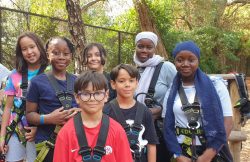 In addition to the Disability Sports Festivals on weeks two and three of the school holiday, Enable ran four multisports sessions across Battersea Sports Centre and Roehampton Playing Fields, covering a range of sports from basketball and dance to hockey and tennis. Thanks to delivery from Emma Cranston (Shaped by Sport) and Fi Lloyd-Williams and the team (Flyerz Hockey) 14 young people accessed the sessions across the summer. All funded by Wandsworth Council’s Short Breaks Fund.

‘We have made some really good friends here’ said a participant’s parent, ‘The young people are all getting to know each other and have formed a really nice little friendship group.’ The watersports sessions offered five free places per day as part of the Holiday Activity Food programme (HAF). The George Shearing centre was also supported by Enable who funded sports and physical activity across two weeks. Partners included, Disability Sports Coach, Fulham Football Foundation, Metro Tennis, Live Karma Yoga and The Movement Factory.

‘I’ve just finished with George Shearing and had the most beautiful time with them as always. It’s such a privilege to deliver these sessions.’ – Coach from Live Karma Yoga.

The HAF programme continued its vital offering, in July and August n & Rollo Estate and Furzedown, where free camps to support young people & families who are in receipt of free school meals to access activities during the Summer Holidays. 133 people attended the day camps which included a nutritious meal and a fun physical activity supported by the London Basketball Association, CALISSEUM and Live Karma Yoga. Two basketball camps and one Multi Sports Camp were offered, which involved smoothie making, calisthenics, basketball, yoga, football, team building challenges plus more! At the end of each week, excursions were taken to Flip Out Wandsworth, Go Ape Battersea and local Ice-Skating Rink. 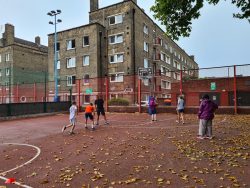 Fishponds Playing Fields in Tooting saw Enable and Wandsworth Council run a summer camp from the 15th– 26th August. 38 children aged 4-11 attended throughout the two weeks. Camp days started at 9am and finished at 3pm and were packed full with a variety of sports such as football, dodgeball, tennis and rugby to name a few, in addition to sport there were arts and crafts activities allowing all children to find something to suit them. Five free places were allocated to children on free school meals. Coaches and children had a fun-packed two weeks; ‘I had a lovely time’, ‘Fishponds camp was great’, ‘Are you doing this again’, ‘I can’t wait to come back tomorrow’. Enable look forward to welcoming everyone back for the October Half term.

The very next day on August 27th ,Fishponds Playing Fields invited local people to their Tooting Community Fun Day. A range of free activities were well attended by all ages and abilities for a day of community bonding. Activities included; a bouncy castle, health and wellbeing workshops and taster sessions, walking football, nostalgic sports day activities and more.

Back at the busy Wandsworth Council leisure sites, Barn Elms Sports Centre joined in the fun and ran a fully booked beach volleyball course with Nikki Strachan that took place 3rd-5th August with 16 children aged 8-15 in attendance. The well organised and engaging camp had some great feedback.

Barn Elms boathouse delivered a hugely popular 26 week-long rowing camps for beginner and experienced rowers over seven weeks of the summer holidays. An impressive 319 rowers aged 12-16 attended with 146 being beginners.

Wandsworth Council will be host to more Enable-run camps at Fishponds and a Disability Camp over the October half term, keep an eye on our social media for further detail coming soon.