The London Youth Games is back! As Europe’s largest youth multi-sports competition, the games offer a unique experience for young people in London. This epic multi-sport event held in London offers opportunities for young people aged 7 to 18 across the Capital to grow and excel in their field. The London Youth Games are contested between the 32 London boroughs (as well as the City of London) annually and take place at various venues for nine months of the year.

There are around 50 events th 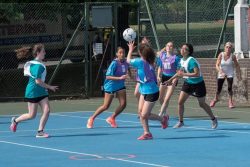 at take place annually including qualifying rounds and standalone finals at venues as prestigious as The Olympic Park and Aquatics Centre. The teams are free to join and open to all young people in London, so if you live or go to school in Wandsworth this is your chance to join the triumphant Team Wandsworth, who are the current Inner London Trophy holders and won the overall Jubilee Trophy for 3 consecutive years!

This year’s Games honour a very special year, as it marks the 45th anniversary since the first ever London Youth Games in 1977 where they were originally set up as one of the projects to mark Queen Elizabeth’s II’s Silver Jubilee

In addition, this year’s London Youth Games also brings a more inclusive competition than ever before! The introduction of a new eligibility criteria through a three-tier system – Aspire, Inspire and Higher makes it possible for more young people with different levels of sporting ability to compete in the Games. There are a range of 25 different sports such as Badminton, Judo, Rowing and Archery, also including Para Sports such as Para Athletics, Para Football, Para Swimming and with more than 100,000 young Londoners taking part in the London Youth Games each year, it is a celebration of sport not to be missed.

Having been running for more than 40 years the Games have seen such notable past participants as four-times Olympic gold medallist Mo Farah, Premier League and England Footballer Raheem Sterling and World and European sprinting gold medallist Dina Asher-Smith. Could you be the next Olympian? Or maybe you would simply like to beat your best while getting more from the sports you love.

If you would like to apply to join Team Wandsworth and make your mark, sign up for your chance to proudly represent Wandsworth in the London Youth Games by registering for upcoming trials using the online form  London Youth Games : Enable (enablelc.org). Once you do so, our team will be in touch.

Please note, to join Team Wandsworth you must either live or go to school in the London Borough of Wandsworth. Please also note that each sport has individual eligibility criteria which regards age and level of sporting ability to be able to compete.

Team Wandsworth is managed and trained by enable on behalf of Wandsworth Council.

Images can be found here

For media enquiries please contact Lorna Dorrell on: ldorrell@enablelc.org or 07704341044